Showing posts with the label Rosamund Pike
Show all 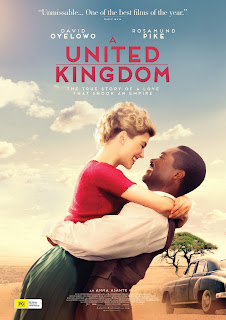 In the late 1940s, King Seretse Khama of Botswana (David Oyelowo) fell in love with Ruth Williams (Rosamund Pike), a white woman from London. Their interracial marriage at the beginning of apartheid in South Africa created an international incident that changed the course of African history. Strong performances by David Oyelowo and Rosamund Pike raise the quality of this by-the-numbers look at a fascinating true-life story. Unfortunately, the political unrest between the British government and the South Africans and the disapproval on both sides that resulted from this forbidden union take a
Read more
More posts