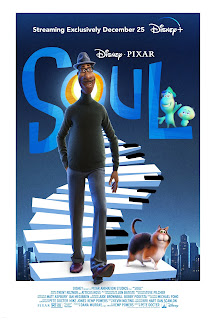 Band teacher Joe Gardner (the voice of Jamie Foxx) is offered a full-time position at his school and also gets a dream opportunity: the chance to play at a popular jazz club. But after an accident on a New York City street, Joe ends up in The Great Before where new souls get their personalities formed prior to going to Earth. Desperately wanting to return home, he is paired with difficult soul 22 (voiced by Tina Fey), who is reluctant to become human. Together, they may just find their purpose in life.

Leaving sequels behind, Disney/Pixar strikes gold with an imaginative and fanciful animated original. Like their "Onward" earlier this year, interesting characters and fresh storytelling captivate the audience. Director Pete Docter, with help from co-director Kemp Powers ("One Night in Miami" screenplay), goes out-of-body for an experience that has some similarities to his inner body "Inside Out". But the story/screenplay by Docter, Powers and Mike Jones has enough differences to be a treasure on its own. Complicated at times, young children may get confused as the plot goes from New York City to the escalator headed to The Great Beyond to The Great Before and back again. The various inhabitants of the afterlife should grab and hold the kids' attention. There are numerous souls that resemble small bluish ghostly figures, along with tall pinkish counselors - all named Jerry. A soul accountant named Terry, looking like a one-dimensional line drawing, must retrieve Joe to balance the books. A talented voice cast adds to the magic. New to Pixar is their first African American main protagonist: Joe Gardner - brought to life by Jamie Foxx in fine voice. Tina Fey is easily recognized as 22. Other notable voices include Angela Bassett as jazz bandleader Dorothea Williams and Ahmir "Questlove" Thompson as band member Curley, Joe's former student who helps him get an audition. Phylicia Rashad can be heard as Joe's mother Libba and Graham Norton voices Moonwind, a guide/captain of a pirate ship rescuing lost souls in The Astral Plane and a hippie sign twirler on Earth. The otherworldly score by composers Trent Reznor & Atticus Ross and Jon Batiste's jazz music compliment striking visuals. Contrasts abound: from the vibrant New York City to the soft pastels of The Great Before. Humor and emotion blend well from start to finish. Tiny souls bounce around the closing credits that end with a "one-liner". The heavenly "Soul" hits all the right notes. (4/5 CAMS)