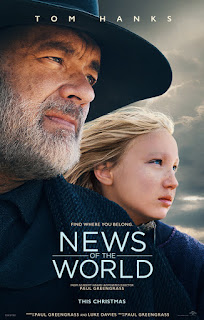 Veteran Captain Jefferson Kyle Kidd (Tom Hanks) is making a living traveling from town to town reading newspaper stories to paying crowds five years after the Civil War. Coming across 10-year-old Johanna (Helena Zengel), who had been captured and raised by a Kiowa tribe, Kidd agrees to return the reluctant girl to her biological aunt and uncle. As they traverse hundreds of miles through rugged territory, the unlikely pair begins to bond while facing many dangers.

This enthralling adventure is easily one of the year's best films. A great new oater in the tradition of John Ford's "The Searchers", there's enough action to please fans of the genre. Paul Greengrass, who helmed Tom Hanks' "Captain Phillips", directs this epic based on the novel of the same name by Paulette Jiles. He also co-wrote the screenplay with Luke Davies. Dealing with loss and redemption, the film focuses almost entirely on Kidd and Johanna. Strong lead performances were needed to succeed. There's no one better than Mr. Hanks to carry a movie and he proves it again here, playing possibly the earliest version of Walter Cronkite. But young Helena Zengel manages to carry many scenes on her own. Together they dominate the screen. An able supporting cast moves things along. Mare Winningham, Elizabeth Marvel, Bill Camp, Thomas Francis Murphy, Fred Hechinger, Ray McKinnon, Michael Angelo Covino and Neil Sandilands are among the many performers portraying characters both good and evil who briefly encounter the two travelers. The look is spectacular, with New Mexico landscapes beautifully photographed by cinematographer Dariusz Wolski. Composer James Newton Howard's rousing and emotional score is a perfect fit. While the drama is heavy at times, there are confrontations and shootouts to satisfy cowboy fanatics like me. "News of the World" delivers a winning western. (4/5 CAMS)