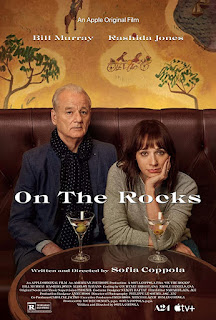 Author Laura (Rashida Jones), struggling with writer's block on the next promised book, begins to suspect there's trouble in her marriage. While she stays home taking care of two young daughters, husband Dean (Marlon Wayans) is off on many trips with employee Fiona (Jessica Henwick) trying to make his business succeed. Little things, like late nights at the office, lead Laura to fear infidelity. She turns to her retired art dealer father, the debonair playboy Felix (Bill Murray), for advice and help. Together, they set out to find clues and end up bonding.

Director/writer Sofia Coppola ("Lost in Translation") takes us on an enjoyable lightweight romp. Rashida Jones (TV's "Angie Tribeca") carries the lead well as a distraught woman, but it's Bill Murray who runs away with this film. At age 70, the iconic star is still charismatic in his own familiar way. The scenes he's not in are less satisfying. This is not the fault of the cast surrounding him. It's just that Murray is simply magnetic. Marlon Wayans plays it rather serious, without a comic touch, as husband/father Dean. Jenny Slate briefly portrays Laura's talkative friend Vanessa. Fans of the "Mission: Impossible" television series should be pleased to see Barbara Bain in a cameo as Gran. Another star of this unhurried charmer is New York City. Cinematographer Philippe Le Sourd lovingly displays the metropolis with only a short side trip to Mexico. The French band Phoenix provides a pop score to go along with the scenery and the song "Identical" for the closing credits. The mystery about adultery keeps the audience guessing until the end. Maybe not her best work, Sofia Coppola's story of connection has much going for it. There's no violence and her reliable leading man is on board. "On the Rocks" is undiluted Murray at his finest. (3/5 CAMS)