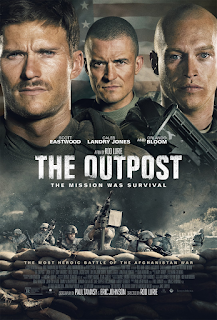 During the Afghan War in 2009, a small group of U.S. soldiers defended an outpost in a valley surrounded by three mountains in Afghanistan. As the Army neared closing the military post, a large force of Taliban fighters made a final attack. First Lt. Benjamin Keating (Orlando Bloom), Staff Sergeant Clint Romesha (Scott Eastwood) and the rest of Bravo Troop 3-61 CAV gallantly battled the enemy in the deadly confrontation - becoming one of the 19-year conflict's most decorated units.
This powerful war film is an emotional and gripping experience. Based on the 2012 book "The Outpost: An Untold Story of American Valor" by CNN's Jake Tapper, the true story of the Battle of Kamdesh gets a riveting screen adaption by director Rod Lurie ("The Last Castle") along with screenwriters Paul Tamasy and Eric Johnson. A slow, but necessary, open introduces the courageous soldiers. Once the battle begins, the intense action is unrelenting - rivaling the best in this genre. Actually, this film deserves to be added to the list of top war movies. It's difficult to single out one performance, but the entire ensemble is superb. Scott Eastwood, looking and sounding a lot like his dad Clint, ably portrays another real-life Clint. Offspring of other famous personalities in roles here are Milo Gibson (son of Mel) as Captain Robert Yllescas, James Jagger (son of Mick) as Chris Jones and Will Attenborough (grandson of Richard) as Ed Faulkner. Orlando Bloom lends his star power as First Lt. Keating and Caleb Landry Jones ("X-Men: First Class") excels as Specialist Sgt. Ty Carter. Bulgaria substitutes for Afghanistan and cinematographer Lorenzo Senatore makes good use of the landscapes with an epic feel that's fit for the big screen. While this spectacle should be seen on the largest screen possible with a surround sound system, the heart-pounding story of sacrifice works well under any viewing conditions. The closing credits are worth sticking through. There are interviews with soldiers and the haunting new song "Everybody Cries", sung by Rita Wilson - which she co-wrote with Rod Lurie and Larry Groupé (who also composed the stirring score). An inspiring salute to heroism, "The Outpost" is explosive. (4/5 CAMS)
Rated R (for war violence and grisly images, pervasive language, and sexual references)
Running Time: 123 minutes
In theaters & streaming VOD on July 3, 2020.
#TheOutpostMovie Drama Orlando Bloom Rod Lurie Scott Eastwood war