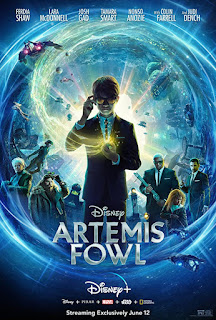 Antiques dealer Artemis Fowl I (Colin Farrell) and his family are reputed to be criminal masterminds. When his father is kidnapped, brilliant 12-year-old Artemis Fowl II (Ferdia Shaw) is determined to get him back. He must take on the underground world of fairies, who are suspected of the kidnapping. The ransom is the missing Aculos, a powerful and magical device that the fairies desperately want returned. The young Fowl sets a plan in motion that leads to a dangerous confrontation.

Fast-paced action and striking effects fill this colorful fantasy adventure. Kenneth Branagh directs the movie adaptation of the first novel in a series written by Eoin Colfer. Having not read the books, it remains to be seen if this film is faithful and will please fans. The screenplay by Conor McPherson and Hamish McColl crams a lot into the slightly over 90 minutes duration. Seemingly designed for the pre-teen set, the plot gets confusing at times for younger children. But it moves along so quickly that there's no time to think about any shortcomings. Newcomer Ferdia Shaw ably handles the lead role in stoic fashion. For star power, Judi Dench, as Commander Root of the elven Lower Elements Police, and Josh Gad, who figures prominently in the story as dwarf informant Mulch Diggums, are on board. Adding his name is Colin Farrell, who gets little screen time as the absent dad. Lara McDonnell provides some of the brighter spots as the feisty elf Holly Short, an LEP reconnaissance officer who gets caught up in the rescue mission. Nonso Anozie and Tamara Smart are part of Artemis' team as faithful servant/bodyguard Domovoi Butler and the young Juliet Butler. There are twists, turns and tongue-in-cheek humor that won't be revealed here. The energetic "Artemis Fowl" flies by fast. (3/5 CAMS)