THE VAST OF NIGHT 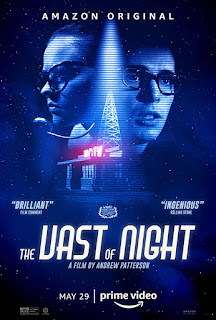 In the small town of Cayuga, New Mexico during one night in the late 1950s, radio DJ Everett (Jake Horowitz) and switchboard operator Fay (Sierra McCormick) hear a strange audio signal while both are at work. The two friends are compelled to solve the mystery of the weird sound. After Everett broadcasts the signal, calls from a couple of listeners shed some light that could lead to the solution.

The sci-fi genre gets a boost from this fresh mystery. Director Andrew Patterson, with a script by producer James Montague and Craig W. Sanger, impresses in
his feature debut (also a first effort for the writers). Using an old-style television as a framing device throughout the film, he presents this tale as an episode of "Paradox Theatre" (with a voiceover that sounds a lot like Rod Serling) - an obvious nod to "The Twilight Zone". Even the mythical town of Cayuga is named after Serling's Cayuga Productions. Relying heavily on dialogue, action is not a driving force. Fortunately, Jake Horowitz and Sierra McCormick convincingly carry the lead roles from beginning to end. The cast is minimal, with the event taking place while most of the town is at a local basketball game. Gail Cronauer and Bruce Davis portray two callers who have insight into the happening. An extremely long and slow opening setup along with some lengthy stretches of conversations are distracting. But creativity shines through the low budget. The eerie score by composers Erick Alexander and Jared Bulmer enhances the atmospheric 1950s-style cinematography of M.I. Littin-Menz. Tracking shots, especially one that appears to be drone-driven, are astounding. Attempts to lighten the tension with humor are hit-or-miss. A radio giveaway involving a supposed piece of Elvis Presley's carpet is amusing. This film has been on the festival circuit after premiering at the 2019 Slamdance Film Festival. It won the Audience Award and rightfully so. Inventive and intriguing, "The Vast of Night" goes one step beyond. (3.5/5 CAMS)