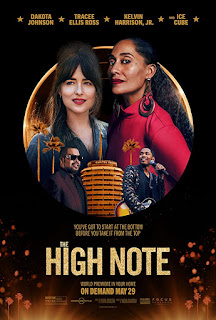 Maggie (Dakota Johnson) is kept busy as personal assistant to superstar Grace Davis (Tracee Ellis Ross), but she desperately wants to become a music producer. After a chance meeting with talented musician David Cliff (Kelvin Harrison, Jr.), Maggie has hopes of fulfilling her dreams while finding romance. Obstacles get in the way, including her steady job and Grace's manager Jack Robertson (Ice Cube).

Solid performances and great music give this appealing diversion a big lift. While the story may seem familiar, director Nisha Ganatra ("Late Night") and writer Flora Greeson have fashioned a
novel look at taking risks along the difficult road to success. Dakota Johnson and Tracee Ellis Ross convincingly flesh out two strong female characters - giving the audience much to root for. Ms. Ross, one of the stars of TV's "Black-ish", gets to display her magnificent voice on songs like "Love Myself" and "Bad Girl". Her vocals brought back memories of her mother Diana Ross. Kelvin Harrison, Jr. ("Waves"), charismatic as David, also proves to be a gifted singer - especially on a knockout version of Sam Cooke's "You Send Me". When the music stops, a talented supporting cast keeps the interest level high. Ice Cube makes the most of his screen time as the aggressive manager. June Diane Raphael as Grace’s companion and Zoë Chao as Maggie's roommate deliver some of the lighter moments. Bill Pullman, in too small of a role, gets the emotional scenes as Maggie's DJ dad. Also briefly seen are Eddie Izzard and record producer Diplo. The film mainly focuses on the determined assistant's struggles, with a little romance on the side. Music is the icing on the cake. "The High Note" is supremely on-key. (4/5 CAMS)