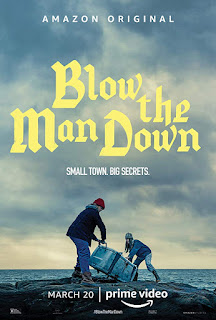 Death and dark secrets hang over the small fishing village of Easter Cove, Maine. The passing of Mary Margaret Connolly (Linda Shary) is difficult on her daughters Priscilla (Sophie Lowe) and Mary Beth (Morgan Saylor), who are left with financial and personal troubles. When an encounter at a local bar goes terribly wrong for Mary Beth, the more responsible Priscilla must help her younger sister out of the dilemma. As the siblings attempt to solve their problems, the town's mysteries are revealed.

Directors/writers Bridget Savage Cole and Danielle Krudy successfully venture into Coen brothers' territory with this delicious feminist film noir. Sophie Lowe and Morgan Saylor deliver strong
lead performances in the mostly female cast. A group of veteran actresses fill supporting roles. Margo Martindale is a standout as the fearsome Enid, the late mother's best friend and former business partner, who runs the town's "bed and breakfast" brothel. June Squibb, Marceline Hugot and Annette O'Toole are the three judgmental and controlling village elders. Gayle Rankin steals a few scenes as Alexis, a prostitute with problems of her own. Among the few male members in the cast are Skipp Sudduth and Will Brittain as police officers Coletti and Brennan, who are trying to find answers to the recent crime wave. The pace is slow, but several twists and surprises keep things from getting boring. The wintry landscapes of cinematographer Todd Banhazl add chills to this quirky "Fargo"-like tale. Sea shanties, including the title song, are sung by a choir of fishermen several times in the film - augmenting the score by Jordan Dykstra and Brian McOmber. There's much to revel in here. Way-aye, "Blow the Man Down" is killer fun. (3.5/5 CAMS)