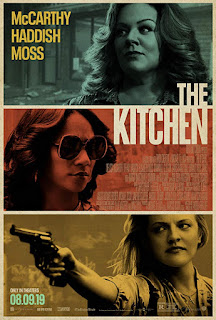 When their mobster husbands are sent to prison, three 1978 New York City's Hell's Kitchen wives are left with little to survive on from the Irish mafia. Kathy (Melissa McCarthy), Ruby (Tiffany Haddish) and Claire (Elisabeth Moss) take matters into their own hands. They become experts at running the criminal organization and eliminating the competition.

This crime drama fails to cook up enough
interest to engage the audience. Based on the Vertigo comic book series by Ming Doyle and Ollie Masters from DC Entertainment, first-time director Andrea Berloff (she also wrote the screenplay) relies on her superb cast to carry the load. McCarthy, Haddish and Moss try to make everything believable with their good performances. Among the supporting players are a few standouts. Domhnall Gleeson as a damaged war vet-turned-mob hitman who returns to town because of Claire, Margo Martindale as Ruby's ruthless mother-in-law who controls the Irish mafia and Bill Camp as the head of an Italian crime family manage to steal some scenes. Common appears as a motivated FBI agent. While under two hours, the movie feels long. A meandering story gets in the way - trying to squeeze too much into the short duration. Twists and a solid 1970s soundtrack help, but not by much. "The Kitchen" is lacking in fine cinematic cuisine. (2/5 CAMS)