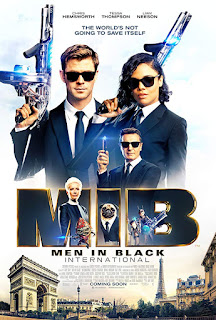 After encountering an alien during her youth, Molly (Tessa Thompson) is determined to join the secret Men In Black organization that monitors and polices extraterrestrials on Earth. Worming her way in as a recruit, she allies herself with Agent H (Chris Hemsworth)  - the MIB hero who saved the planet years ago. They are sent by U.S. branch head Agent O (Emma Thompson) to the London headquarters, run by H's ex-partner Agent High T (Liam Neeson), to check on problems that may include an inside mole. Securing a destructive weapon and keeping it out of the hands of enemy aliens is imperative - or the world could cease to exist.

This by-the-book sci-fi adventure fails to capture
the fun and energy of the first "Men in Black" (1997). Even sequels 2 and 3 were a bit better. What's missing? Will Smith and Tommy Lee Jones as Agents J & K. Also missing: director Barry Sonnenfeld and Ed Solomon's clever script. What's (unfortunately) new? The on-screen team, director and two screenwriters. Chris Hemsworth mostly stands around looking good. Occasionally he gets to flex his comedy muscles as he did in this year's "Avengers: Endgame". Tessa Thompson plays straight "man" Agent M, but sometimes displays her acting skills. Chris and Tessa have lost much of the appeal they had in "Thor: Ragnarok". Director F. Gary Gray fills the screen with action - as he did with "The Fate of the Furious". CGI effects are plentiful. Yet none of this covers up the heavily clichéd script by Matt Holloway and Art Marcum. Liam Neeson is underutilized - sleepwalking through the role. At least the too-briefly seen Emma Thompson, reprising her role from "Men in Black 3", plays it deadpan - with a great line about women in the group. Rebecca Ferguson captures a few scenes as Riza, a multi-armed alien seductress and arms dealer. Many of the laughs are delivered by tiny sharp-tongued alien Pawny, voiced by Kumail Nanjiani, who has lost his queen and decides to protect M. Adding an element of danger as evil shapeshifters are hip-hop dancing twins Laurent and Larry Bourgeois. Rafe Spall provides the drama as Agent C of the London MIB, who doesn't trust H. A high-tech super-speed subway train allows for some changes of scenery. The international locations range from England to Morocco. Danny Elfman's fabulous score returns with a little help from Chris Bacon. There are creature cameos from other films in this series. Also back is the neuralyzer, a device that wipes the memory of anyone who witnesses what they should not have seen. But the minuses outweigh the pluses. With or without the neuralyzer, "Men in Black: International" is forgettable. (2/5 CAMS)