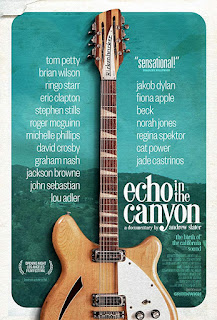 After the Beatles and the British music invasion in the early 1960s, musicians flocked to the recording studios of Southern California to not only emulate the sound, but to create their own. The fusion of folk and rock led the new wave of musical creativity with The Byrds - centering in Laurel Canyon. From 1965 through 1967, the California Sound exploded with the songs of groups like The Mamas and the Papas, The Beach Boys and Buffalo Springfield.

This fascinating documentary explores an influential span of time in American pop music like no other film before it. Executive Producer Jakob Dylan, front man for The Wallflowers and son of Bob Dylan, expertly and entertainingly
guides us on this musical history tour. His skillful interviewing unlocks a wealth of information on bands, origins, influences and relationships from many rock legends. Tom Petty (in reportedly his last on-camera interview) leads a list of luminaries that includes Jackson Browne, David Crosby, Roger McGuinn, Graham Nash, Michelle Phillips, Ringo Starr, Stephen Stills, Brian Wilson and more. Director Andrew Slater, former Capitol Records CEO, has lovingly crafted this lyrical gem - filling it with archival performance footage, newly recorded pieces and segments of a 2015 tribute concert featuring Jakob (with a little help from Fiona Apple, Beck, Jade, Cat Power and Regina Spektor) belting out new versions of classic hits from this period. Supposedly Slater and Dylan were inspired by Jacques Demy's ("The Umbrellas of Cherbourg") 1969 LA love story "Model Shop" starring Gary Lockwood ("2001: A Space Odyssey") and Anouk Aimée. Several scenes are used throughout this film, adding to the feel of the 60s. I'm leaving out specific details - there's more fun in discovering these for yourself. My only complaint is the short length - under 90 minutes. It left this baby boomer wanting more - a sign that the movie worked well. But this exceptional tuneful trip isn't just for my generation. It's for music lovers past, present and future. "Echo in the Canyon" resonates with good vibrations. (4/5 CAMS)