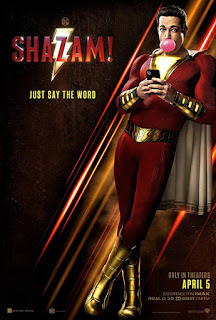 Troubled teen Billy Batson (Asher Angel), constantly running away from foster care, is placed in another home but is reluctant to fit in. After defending his new "brother" Freddy (Jack Dylan Grazer) from bullies at school, he finds himself magically transported to the lair of The Wizard (Djimon Hounsou), who wants him to become the next super-powered defender against evil. Loudly uttering the word SHAZAM!, Billy turns into an adult superhero (Zachary Levi) - retaining his teenage mind. With the help of Freddy, he slowly discovers what his astounding abilities are. While foolishly wasting these newfound capabilities, a deadly threat arises. Dr. Thaddeus Sivana (Mark Strong) and his evil forces want Batson's powers and will stop at nothing to obtain them.

Action, humor and heart with a positive message make
this big screen adventure entertaining for most family members. Only some intense scenes, language and suggestive material are inappropriate for young children. Zachary Levi is this film's best asset, with his brilliant portrayal of a teen trapped in an adult body. One minute he is in shock and awe at his powers and the next minute he's frivolously using these abilities for teen tricks. The movie slows down when Levi is not on screen. That's not to say the rest of the cast isn't good. Asher Angel delivers a believably intense Billy Batson and Jack Dylan Grazer gets the most out of his sidekick role. Superhero films work best when the villain is as formidable and interesting as the hero. Mark Strong may not be the most interesting or even the "strongest" of villains, but he is powerful enough to keep things menacing and his Dr. Sivana is driven by past failings - a bad guy with reasons beyond just wanting to rule the world. Also threatening, but in a good way, is Djimon Hounsou as The Wizard. He towers over Billy as he tries to give the teen powers to defeat evil. Director David F. Sandberg ("Annabelle: Creation") fills the screen with jokes and sight gags while advancing Henry Gayden's predictable screenplay (from a story by Gayden and Darren Lemke). The uneven special effects range from astounding to cheesy, but far outshine the television series with the same name from 1974. There are a few surprises along the way - some involving Batson and his foster family, but no spoilers given away here. Stay through the end credits for sure. With just one word, "Shazam!" becomes a winner for the DC Extended Universe. (4/5 CAMS)