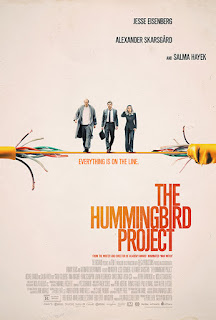 Getting information from the exchange in Kansas to Wall Street's New Jersey data bank the fastest can mean billions of dollars to traders. Hustler Vincent (Jesse Eisenberg) and his nerdy, but brilliant, coder cousin Anton (Alexander Skarsgård) hit on the idea of laying fiber-optic cable in a straight line to carry the data between the two points. They quit their jobs under high-powered Wall Street CEO Eva Torres (Salma Hayek) after securing financing and hiring chief engineer Mark Vega (Michael Mando) to oversee the huge project. Obstacles include tunneling under national parks, homes, mountains, swamps and private lands. Getting permission from all involved, including the opposing Amish, is a daunting task. Also in the way is former boss Torres, who backs a data delivery by microwave plan. A millisecond, the speed of a hummingbird's single wing-beat, is at stake.

While the plot gets bogged down with too many complicated technical details, Jesse Eisenberg and Alexander Skarsgård make this
David vs. Goliath drama worth seeing. Eisenberg delivers another high pressure performance that's reminiscent of his role as Mark Zuckerberg in "The Social Network". But it's Skarsgård who dominates this film. Nearly unrecognizable under a bald wig, he is at his best as an eccentric genius. When he's not on screen, the film suffers. Director/writer Kim Nguyen ("War Witch") manages a few tense moments during the competitive race to get the quickest numbers and injects dramatics with a health issue for Eisenberg's Vincent. This is a character-driven movie and is well-cast. The leads are terrific and the supporting players are good. Salma Hayek goes way over the top as a demanding CEO. Sarah Goldberg carries a few scenes as Anton's beautiful wife Mascha and so does Michael Mando as the grounded and pressured project engineer. Filmed in the director's homeland of Canada, the scenery subs nicely for the United States. Listed as a thriller, the thrills are few but the drama is heavy. "The Hummingbird Project" flies thanks to its stars. (3/5 CAMS)