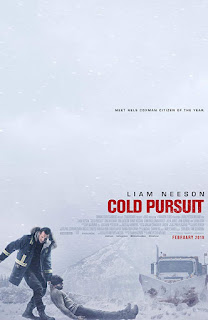 As a snowplow driver and recently named Citizen of the Year in a Rocky Mountains resort town, Nels Coxman (Liam Neeson) leads a good life with wife Grace (Laura Dern). But when their son is found dead, he becomes distant from his spouse and is obsessed with eliminating those responsible. The body count begins to rise as Nels works his way up the chain - leading to violent drug kingpin Viking (Tom Bateman) and a final confrontation that includes a rival gang.

This grisly revenge drama is laced with dark-edged humor. Based on the 2014 Norwegian film "In Order of Disappearance" (original title "Kraftidioten") starring Stellan Skarsgård, the loose remake feels
like "Fargo". Wintry Canadian landscapes captured by cinematographer Philip Øgaard, who also shot the original, add to this feel. Director Hans Petter Moland helms the Americanized version of his own 2014 thriller, with Frank Baldwin reworking Kim Fupz Aakeson's "Kraftidioten" script. Liam Neeson is the perfect choice as lead actor, doing what he does best: plowing his way through the baddies in cool fashion. For the sake of a joke or two, his character's last name is Coxman - in the first film it was Dickman. Go figure. Laura Dern surprisingly gets little screen time as Nels' troubled spouse, but Emmy Rossum, as the new cop in town, and Julia Jones, as Viking's ex-wife, chew up some of the desolate scenery. William Forsythe is also underused as Coxman's brother with criminal connections. Tom Bateman makes a nasty villain. A trivia note: Micheál Richardson, the real-life son of Liam Neeson and Natasha Richardson, plays the deceased offspring in early scenes. While it has all been done before, there's some gruesome fun to be had here. As the bodies (most of the victims have screwy nicknames) pile up, a droll on-screen tally appears. The laughs and drama mix well. "Cold Pursuit" is a diverting chiller. (3/5 CAMS)