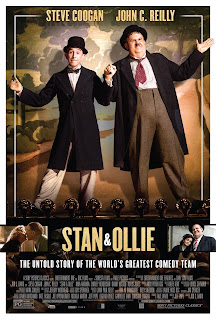 Embarking on a live stage tour of Britain in 1953, Stan Laurel (Steve Coogan) and Oliver Hardy (John C. Reilly) are looking to revive their declining popularity. The comedy duo's film career is pretty much behind them and Ollie has major health issues. But audiences are slowly building and Stan is seeking backing for a movie spoof of Robin Hood. While their relationship is strained, the boys get a needed lift when wives Ida Laurel (Nina Arianda) and Lucille Hardy (Shirley Henderson) join them in England. The show must go on.

Remarkable performances dominate this loving tribute to Laurel & Hardy. Makeup and prosthetics play a big part in
making Steve Coogan and John C. Reilly look like the iconic pair, but both actors capture the heart and soul of Stan and Ollie. This is the film's biggest asset, making it a must-see for the duo's legions of fans (I am one). Director Jon S. Baird ("Filth") and writer Jeff Pope have fashioned a low-key look at the ups and downs of show business, but there's much to savor in this cinematic journey. The height of the team's film career is briefly spotlighted. A few recreations of routines are included. The memorable song and dance and humor of "Way Out West" (1937) take center stage for me. Learning about their latter years is an added plus. A superb supporting cast doesn't hurt. Nina Arianda, as Stan's forceful Russian-born wife, and Shirley Henderson, as Mrs. Hardy, manage to steal several scenes on their own. Danny Huston deserves more screen time. His magnetic portrayal early in the movie of powerful and demanding producer Hal Roach, who paired the comedians, is commanding. Thanks to this entertaining piece of history, I'm revisiting the old L&H comedies. Sony Pictures Classics has a winner here. "Stan & Ollie" is another fine film they've gotten me into. (4/5 CAMS)