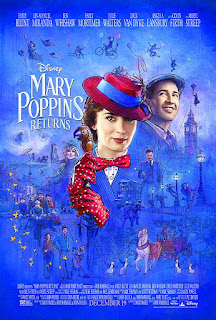 With the bank about to foreclose on the Cherry Tree Lane family home, recently widowed Michael Banks (Ben Whishaw) has much on his mind. Having to raise three children by himself, with a little help from his sister Jane (Emily Mortimer), the pressure is building up. Arriving just in time to lend a hand is the childhood nanny of Michael and Jane: the magical Mary Poppins (Emily Blunt). Taking youngsters Anabel (Pixie Davies), John (Nathanael Saleh) and Georgie (Joel Dawson) on extraordinary adventures is only the beginning of putting the Banks household back in order. Tagging along is lamplighter Jack (Lin-Manuel Miranda), who assists in the nanny's objective.

This delicious spoonful of sugar is a practically perfect sequel to Walt Disney's 1964 masterpiece. New songs, endearing characters and fabulous hand-drawn animation make
this cheery delight a worthy follow-up to the captivating original. Director Rob Marshall (co-writer with David Magee and John DeLuca), no stranger to musicals with the award-winning "Chicago" under his belt, delivers a charmer that Walt would be proud of. Working with the series of books by P.L. Travers (the second book was titled "Mary Poppins Comes Back"), Marshall has come up with a refreshing story that feels comfortably familiar. All of the segments, situations and tunes that made Disney's classic so memorable are present in disguised form - although some of the Sherman Brothers songs from the first film are weaved into Marc Shaiman's enchanting score. Lamplighters dance to "Trip a Little Light Fantastic" much like the chimney sweeps' "Step in Time". Many of the new songs by Shaiman and lyricist Scott Wittman are substitutes for those indelible gems. The amazing throwback animation sequence will delight young and old alike. This excursion involves an adventure inside the drawings on the outside of a broken antique bowl - and those Poppins penguins make an appearance. There's also a CGI underwater fantasy journey through a bubbly bathtub. An ideal Emily Blunt and energetic Lin-Manuel Miranda (complete with a questionable cockney accent) lead the stellar cast. A spry Dick Van Dyke portrays Mr. Dawes Jr., chairman of Fidelity Fiduciary Bank, while Colin Firth is the bank's property-grabbing president, William Weatherall Wilkins. Meryl Streep beguiles as Mary's eccentric cousin Topsy (remember Ed Wynn's Uncle Albert?). Ben Whishaw and Emily Mortimer provide some of the grown-up moments as the adult Michael and Jane. Look quick and you may spot the original Jane: Karen Dotrice. Pixie Davies, Nathanael Saleh and Joel Dawson play the new and adorable Banks kids on the block. David Warner takes over the Reginald Owen role of the stalwart retired naval officer Admiral Boom, Julie Walters is feisty housekeeper Ellen and Angela Lansbury dazzles as the Balloon Lady. All of the ingredients add up to a lively and satisfying musical extravaganza. The cinemagical "Mary Poppins Returns" is the jolliest of holiday movies. (4/5 CAMS)