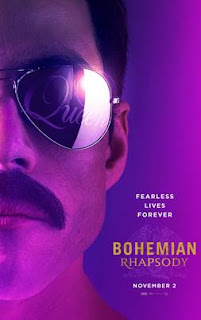 Aspiring singer/songwriter Farrokh Bulsara (Rami Malek), later known as Freddie Mercury, forms the British band Queen. With members Brian May (Gwilym Lee), Roger Taylor (Ben Hardy) and John Deacon (Joseph Mazzello), the group rises to the top of the charts. Freddie's complicated life with girlfriend Mary Austin (Lucy Boynton) plays out behind the scenes as he and the band become superstars. The journey culminates with their reunion at 1985's Live Aid concert.

This rock biography has a beat you can dance to, but
the story lacks substance. Nothing is revealed about the band members that isn't already common knowledge. Director Bryan Singer presents a by-the-numbers musical biopic, with a little help from screenwriters Anthony McCarten and Peter Morgan. What saves this film are the fabulous tunes blasting off the screen and Rami Malek's extraordinary award-worthy interpretation of Queen's iconic lead singer. He looks more like Mercury during the later years with short hair and mustache. The supporting cast provides excellent backup. Gwilym Lee, Ben Hardy, Joseph Mazzello and Lucy Boynton carry several scenes as the bandmates and girlfriend of Mercury. Also good are Aidan Gillen as John Reid and Tom Hollander as Jim Beach (dubbed "Miami" by Freddie), two of Queen's managers. Allen Leech is Paul Prenter, Freddie's controlling personal manager. Look close for Mike Myers, playing EMI record executive Ray Foster. This is a clever bit of casting since Myers' "Wayne's World" gave the title song a huge revival. Although the plot is simple and familiar, the price of admission is cheap for what amounts to an over two-hour concert. Buoyed by the infectious Queen soundtrack and Rami Malek's killer performance, "Bohemian Rhapsody" will rock you. (3/5 CAMS)