By Roger Tennis - October 11, 2018
After losing his young daughter to a malignant brain tumor, test pilot and aeronautical engineer Neil Armstrong (Ryan Gosling) decides to try out for NASA's space program as a civilian astronaut. When the ultimate challenge arises, he leaves wife Janet (Claire Foy) and family behind to join the flight to his fated destination: the Moon. 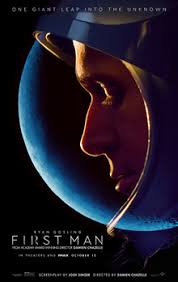 depart La La Land for
outer space. Based on James R. Hansen's biographical book, Josh Singer's screenplay delves into Armstrong's life from 1961 to July 20, 1969 - the day he walked on the Moon during the Apollo 11 mission. Despite the story and outcome being well-known, Chazelle manages to maintain interest throughout with many tense and heartbreaking moments along the way. Having a first-rate cast doesn't hurt. Staying low-key and showing little emotion, Ryan Gosling puts a stoic and human face on Neil Armstrong while Claire Foy ("The Crown") displays a quiet courage with at least one burst of anger as supportive wife Janet. Both performances are award-worthy. A strong group of actors take on supporting roles that are also impressive. Among them are Jason Clarke as friend and fellow astronaut Ed White, who tragically died during a pre-launch test for Apollo 1, and Corey Stoll as the outspoken Buzz Aldrin, the second member of the Apollo 11 crew to Moonwalk. Other notables include Kyle Chandler and Ciarán Hinds as NASA chiefs Deke Slayton and Gene Kranz. Some striking special effects add to the realism, accompanied by Justin Hurwitz's magnificent musical score. It all unfolds under the watchful eye of executive producer Steven Spielberg. At times the epic length (well over two hours) feels stretched out and the close-up shaky cam on the big screen doesn't help. But these are minor quibbles for a film that entertainingly presents history. "First Man" has all the right stuff. (4/5 CAMS)