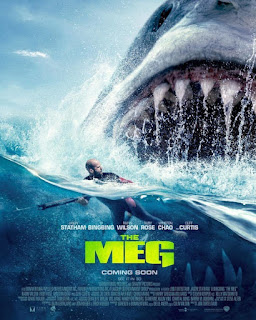 Jonas Taylor (Jason Statham), who lost crew members years ago in an attack by a giant prehistoric shark in uncharted deep waters, gets a second chance to face the creature. A team of divers for a modern undersea research facility are trapped inside a submersible at the bottom of the deepest Pacific trench with the threatening Megalodon outside. With little time to save his team, oceanographer Dr. Zhang (Winston Chao) recruits a reluctant Taylor for the rescue mission. Paired with Zhang's daughter Suyin (Li Bingbing), Jonas faces
his fears as he attempts to save lives and destroy the massive presumed extinct menace.

Lively action, thrills and a few laughs (some unintentional) keep this summer popcorn cruncher afloat. This film delivers exactly what the trailer promises. Jason Statham is in his element here as the rugged, but tortured, hero. He's given plenty of scenes to flex his muscles. Based on the book "Meg: A Novel of Deep Terror" by Steve Alten, director Jon Turteltaub ("National Treasure") and screenwriters Dean Georgaris, Jon Hoeber and Erich Hoeber have managed to deliver a fast-moving and thought-free monster fest. While there's nothing here that hasn't been done before, watching the huge shark chow down is a guilty pleasure. The acting is average for this genre, with several stock characters for potential shark food. Rainn Wilson plays the obnoxious billionaire behind the research project. Ruby Rose, Cliff Curtis, Masi Oka, Ólafur Darri Ólafsson, Page Kennedy and Jessica McNamee (as Taylor's ex-wife) are among the supporting cast as crew members. Fans of TV's "Longmire" will get to see star Robert Taylor as Dr. Heller, a survivor of the first encounter who blames Jonas for the deaths of comrades. A bright note is Shuya Sophia Cai as the wise-beyond-her-years Meiying, the young daughter of Suyin. Most of the effects are good and the scares get a push from Harry Gregson-Williams' tense music score. There are worse ways to spend a couple of hours. "The Meg" takes an entertaining bite out of the "Jaws" market. (3/5 CAMS)