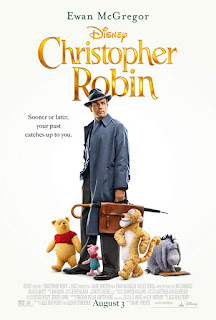 Pressured by the demands of work, an adult Christopher Robin (Ewan McGregor) has little time to devote to his wife Evelyn (Hayley Atwell) and daughter Madeline (Bronte Carmichael). But when his childhood companion Winnie the Pooh (the voice of Jim Cummings), a stuffed toy bear, magically turns up in London, Christopher gets the chance to return to the Hundred Acre Wood and the joys of his youth.

Whimsical characters and an uplifting story put some bounce into this nostalgic family film. Blending the adult life of Christopher Robin with
A.A. Milne's lovable animal creations works for the most part. Director Marc Forster ("Finding Neverland") unfolds the screenplay by Alex Ross Perry, Tom McCarthy and Allison Schroeder at a leisurely pace. The movie gets off to a familiar start with pictures, resembling E.H. Shepard's original illustrations, coming to life off the pages of a book. The audience gets to catch up on Christopher's adventures since leaving the Hundred Acre Wood: boarding school, service in World War II, marriage, a daughter and an unsatisfying job as a manager at a luggage company. Young children will be bored until Pooh and friends arrive. These CG creatures look more like real stuffed animals than Walt Disney's endearing characters, but they are still fanciful. The voice cast deserves credit for closely matching the original vocals. Jim Cummings is both Pooh and Tigger - sounding a lot like Sterling Holloway (my favorite among Walt's many vocal artists) and Paul Winchell. Brad Garrett voices the gloomy Eeyore, Nick Mohammed is Piglet, Peter Capaldi is Rabbit and Toby Jones provides the voice of Owl. Kanga and Roo are brought to vocal life by Sophie Okonedo and Sara Sheen. The impressive Ewan McGregor leads the human cast with a brilliant portrayal of a pressured workaholic - reminiscent of Mr. Banks in Disney's "Mary Poppins". Hayley Atwell, in a departure from her role as Marvel's Agent Carter, and Bronte Carmichael are charmers as wife Evelyn and daughter Madeline. Mark Gatiss is despicable as Christopher's boss Giles Winslow. The music score by Jon Brion and Geoff Zanelli is memorable with the Sherman Brothers' song "Winnie the Pooh" woven in. "The Wonderful Thing About Tiggers" is also included. Richard Sherman provides a couple of new tunes and can be seen performing over the closing credits. There are somber moments beyond Pooh's frown and Eeyore's pessimism, but happiness triumphs over Heffalumps and Woozles. "Christopher Robin" is a honey of a tale. (3/5 CAMS)