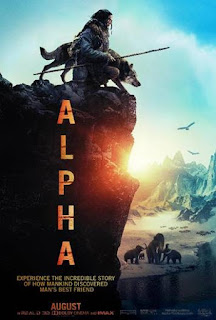 20,000 years ago in Europe's harsh terrain, teen Keda (Kodi Smit-McPhee) accompanies his father Tau (Jóhannes Haukur Jóhannesson) and tribal members on the annual bison hunt for the first time. When he becomes injured and presumed dead, Keda must learn to survive in the unforgiving wilderness. In an attack by a wolf pack, the teen seriously injures the leader. Rather than killing the abandoned animal, Keda nurses the canine he names Alpha back to health. Together, they slowly
form a bond that strengthens during the struggle to return home.

This interesting fictional account of man's first best friend and survival is marked by two compelling lead performances and spectacular visuals. Kodi Smit-McPhee (Nightcrawler in the latest "X-Men" series) convincingly portrays the beleaguered Keda. It's rather impressive acting since he must perform most of the movie opposite scene-stealing Chuck the Czech Wolfdog. The reluctant bond between them works well as they are constantly in and out of danger. Albert Hughes directs for the first time without his sibling Allen (known as The Hughes Brothers for films like "Dead Presidents"). He has also written the story upon which Daniele Sebastian Wiedenhaupt's insightful screenplay is based. Marketed as family entertainment, this film is not without audience problems. Several moments of danger will frighten small children. Older kids may be bored during the few segments with dialogue, which are non-English with subtitles. The exciting opening bison hunt sequence gets repeated and is less thrilling the second time around. But this cinematic journey moves along briskly and isn't drawn out to an epic length. Humor is added to lighten the tense action - such as a prophetic retrieval incident. The international supporting cast, including Jóhannes Haukur Jóhannesson and Natassia Malthe as Keda's grieving parents, gets very little to do. The third starring role goes to Martin Gschlacht's stunning cinematography. Chilling winter vistas and rugged landscapes nearly qualify as characters themselves. A dynamic music score by Joseph S. DeBeasi and Michael Stearns covers nicely for the shortage of conversation. Foretelling a dog's life with humans, this is a unique coming-of-age tale with a delightful surprise near the end. "Alpha" is a fetching adventure. (4/5 CAMS)