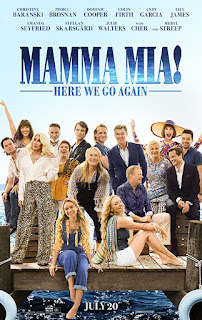 On the Greek island of Kalokairi, Sophie (Amanda Seyfried) is preparing for the grand reopening of her mother Donna's (Meryl Streep) villa/hotel with a little help from Sam (Pierce Brosnan), one of her possible fathers. On Sophie's guest wishlist are her other dads Harry (Colin Firth) and Bill (Stellan Skarsgård), along with Donna's best friends Tanya (Christine Baranski) and Rosie (Julie Walters). She also wants to save her troubled marriage to Sky (Dominic Cooper) while learning about her mother's past. The youthful Donna's (Lily James) romances with Sam (Jeremy Irvine), Harry (Hugh Skinner) and Bill (Josh Dylan) are revealed. Also unveiled is her life with
Tanya (Jessica Keenan Wynn) and Rosie (Alexa Davies), forming their musical group Donna and the Dynamos and how she came to live on the Greek island.

Music, laughter and tears fill the screen in this fan-pleasing sequel that's more about the past than the present. This allows for an energetic young cast to warble the ABBA tunes, with Lily James an absolute vocal treasure. Veteran cast members get their chance to sing again. Pierce Brosnan hasn't improved, but manages to whisper his way through a song. Classic hits like "Mamma Mia" and "Dancing Queen" return, but many lesser known album cuts make up most of the soundtrack. Ms. James, with the Dynamos, has a showstopper with "When I Kissed the Teacher". Director Ol Parker ("Imagine Me & You") dazzles with the musical numbers, but his screenplay is uneven and rather formula. Soap opera and gloom get in the way of all the glitz and occasionally tacky glamour. But those tunes are the major attraction. Cher turns up as Sophie's grandmother and belts out a fabulous rendition of "Fernando" with Andy Garcia, who plays the manager of the new Hotel Bella Donna. Someone who shouldn't be overlooked is Omid Djalili as a Greek customs officer with a fixation on hairdos - a hilarious running gag. As captured by cinematographer Robert D. Yeoman, the lush landscapes match the infectious soundtrack. Anne Dudley's score enhances the music of ABBA members Björn Ulvaeus and Benny Andersson, who are also executive producers and may have cameos. No spoilers here. Be sure to stay through the credits for musical treats and one final scene at the very end. Not just another song and dance, "Mamma Mia! Here We Go Again" shouldn't be this series' Waterloo. (3/5 CAMS)