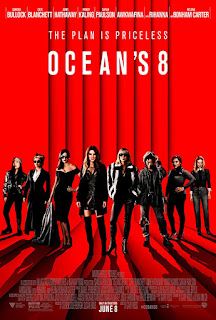 Released after almost six years in prison, Debbie Ocean (Sandra Bullock) has been planning a big heist in the tradition of her legendary conman brother Danny. Enlisting the help of her ex-associate Lou Miller (Cate Blanchett), she gathers a team to extract a 150 million dollar diamond necklace that will be worn by famous actress Daphne Kluger (Anne Hathaway) at the Met Gala event. The expert group includes fashion designer Rose (Helena Bonham Carter), jeweler Amita (Mindy Kaling), street con artist Constance (Awkwafina), skilled fence Tammy (Sarah Paulson) and hacker Nine Ball (Rihanna). Together they must pull off the impossible to take the prize.

An engaging cast steals the spotlight in this
pleasing and lightweight crime caper. This female continuation of the Ocean's films starring George Clooney follows the same formula. There's no blood and guts or much suspense, but the amusement is in watching how they accomplish the amazing feat. Director/co-writer Gary Ross ("The Hunger Games") keeps things moving along at a steady pace. While there's a twist near the end, it is all rather predictable. But the above-mentioned cast, led by Sandra Bullock, makes it enjoyable. Other notables include Elliott Gould, a holdover from Clooney's crew, as Reuben and James Corden as an insurance investigator who is on the case. Richard Armitage portrays Claude Becker, an art dealer/con artist responsible for Debbie being imprisoned. Many cameo appearances are present, especially at the Met Gala. There's some fun in spotting the celebrities (none revealed here). For my generation, these movies can't top Frank Sinatra and the Rat Pack in 1960's freewheeling, easygoing "Ocean's 11". Ironically, this new movie uses Nancy Sinatra's version of "These Boots Are Made for Walkin'" - which gave me flashbacks to the original. With this latest cinematic offering, it's comforting to know that you can spend a couple of hours at the movies without a barrage of violent images. "Ocean's 8" deserves to grab a share of the box office. (3/5 CAMS)