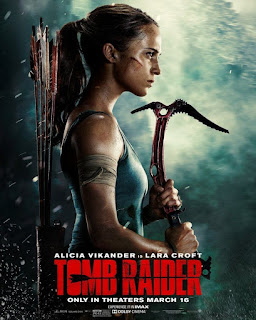 Lara Croft (Alicia Vikander) is driven to find out what happened to her father, Lord Richard Croft (Dominic West), who vanished while searching for the tomb of Queen Himiko on a mythical island off the coast of Japan. Although the legend says that the fabled queen's touch causes death, Lara sets out on a dangerous quest to find answers. Joining her is Lu Ren (Daniel Wu), a boat captain whose father disappeared along with Lord Croft. When their destination is reached, they must face
Mathias Vogel (Walton Goggins) and his deadly team. Funded by the sinister organization Trinity, Vogel has to uncover the tomb at all costs.

Fast-pacing enhances this modern throwback to those exciting movie serials of yesteryear. While not breaking any new ground, mindless thrills keep this reboot afloat. Having an Oscar-winning actress as the star doesn't hurt. Alicia Vikander, who won the Best Supporting Actress award for "The Danish Girl", portrays a more intense and grounded heroine - replacing the sexiness of Angelina Jolie. She's fun to watch in a different kind of role for her. Norwegian director Roar Uthaug ("The Wave") wisely keeps the camera focused on his star for most of the film. Deep thinking isn't required for this adventure. The screenplay by Geneva Robertson-Dworet and Alastair Siddons, from a story by Robertson-Dworet and Evan Daugherty, is familiar and predictable at best. It borrows from many of the greatest films in this genre with only a few minor twists. One is the main villain Mathias Vogel, played with a wide-eyed craziness by Walton Goggins. His character's ambition is to finish his years-long mission and return home to his family - a refreshing change from world domination. A couple of interesting near-cameos are Kristin Scott Thomas and Derek Jacobi as business associates at Croft Holdings. Also look for Nick Frost as a pawn shop operator. The thunderous music score by Tom Holkenborg (aka Junkie XL) accompanies many over-the-top special effects confrontations where Lara gets into trouble and recovers way too quickly. As an action-filled matinee flick, "Tomb Raider" is dead on target. (3/5 CAMS)


Rated PG-13 (sequences of violence and action, and for some language)
Running Time: 118 minutes