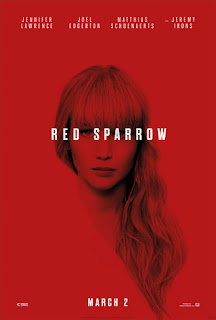 After a career-ending injury, Russian ballerina Dominika Egorova (Jennifer Lawrence) is desperate to help her ailing mother (Joely Richardson). Coerced by her Uncle Vanya (Matthias Schoenaerts), a high-ranking government official, she is recruited to endure sadistic training at the Sparrow School to become a seductive spy. As the most dangerous Sparrow, Dominika is assigned her first mission: get close to American CIA agent Nate Nash (Joel Edgerton) and uncover the name of a mole in the Russian government.

Jennifer Lawrence and a fine cast give this
tense espionage thriller an energetic boost. Based on the novel by Jason Matthews, Justin Haythe's screenplay has more in common with cerebral spy films such as "The Spy Who Came in from the Cold" than action flicks like "Atomic Blonde". Having worked with Jennifer on three of The Hunger Games movies, director Francis Lawrence (not related to her) takes it slow and easy as the plot unfolds. Occasionally it feels too slow during the nearly two-and-a-half-hour length. But spurts of graphic violence will have the audience on edge. Warning: some of the bloody torture scenes are difficult to watch. The biggest asset is Jennifer Lawrence's powerful performance. Her flawless portrayal of a woman who refuses to be broken is the driving force. Matthias Schoenaerts is chilling as her wicked uncle and Joel Edgerton makes a rugged secret agent. Other outstanding players include Joely Richardson as her mother and Charlotte Rampling as the school's cold headmistress. Jeremy Irons and Ciarán Hinds portray high-level Russian military officers. In a small role, Mary-Louise Parker is an inebriated U.S. senator's Chief of Staff looking to cash in on government secrets. The filmmakers seem unsure about how to close the film. There's one beautiful scene that makes a perfect ending, but they choose to continue beyond that point. Still, the story is interesting and there are a few surprises that will keep you guessing until the end. One major twist I didn't see coming - but I should have. Relevant in today's climate, an intelligent spy drama takes wing in "Red Sparrow". (3/5 CAMS)