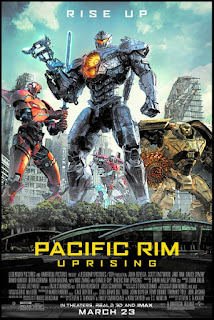 Years after the monstrous other-worldly Kaiju were defeated by the human-piloted super robotic Jaeger along the Pacific Rim, another threat is imminent. Jake Pentecost (John Boyega), whose legendary father died saving the world from the monsters, is involved in criminal activity after abandoning pilot training. Caught stealing Jaeger parts, Jake and young hacker Amara (Cailee Spaeny) are given the choice of prison or pilot training. They join the inexperienced pilots just in time for the new battle.

For those craving another "Transformers" epic, this giant robot sequel fills the void in a better way. Director/co-writer Steven S. DeKnight (TV's "Daredevil" and "Smallville") has
improved on 2013's "Pacific Rim" with a shorter length (by approx. 20 minutes). The first half moves along slowly with human drama and corporate espionage to uncover the perpetrator in a surprising plot twist. Then the giant Kaiju and killer robots arrive for an exciting, but overlong, conclusion. Star and producer John Boyega, of "Star Wars" fame, delivers a magnetic performance that rises above the material. Joining him in full hero mode is Scott Eastwood, complete with a familiar squint, as rival pilot Nate Lambert. Cailee Spaeny is convincing as the smart, reckless and fearless new pilot Amara Namani. There are connections to the original adventure. Boyega's character Jake is the son of late legendary hero Stacker Pentecost (Idris Elba). Rinko Kikuchi returns as Mako Mori, Stacker's adopted daughter and pilot. Also back are Charlie Day and Burn Gorman as Kaiju experts Dr. Newton Geiszler and Dr. Hermann Gottlieb. While there's nothing here that hasn't been done before, the story is plausible for this genre. Humor is mixed in with the action and the look is spectacular. Be sure to see it on the biggest screen possible. Does Tokyo get stomped on? Maybe. "Pacific Rim Uprising" is a heavy metal rush. (3/5 CAMS)