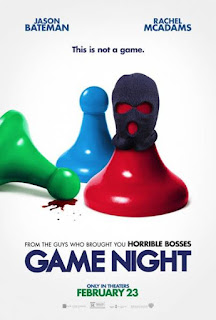 Competitive married couple Max (Jason Bateman) and Annie (Rachel McAdams) host a weekly game night with friends. When Max's successful and charming brother Brooks (Kyle Chandler) comes to town, the fun evening gets exciting. Brooks sets up a murder mystery party with fake bad guys and government agents, but then he gets kidnapped. Is this part of the fantasy game or is it real? The players are
in over their heads as they try to unravel the mystery during one frenzied night.

Dark humor and an appealing cast keep this engaging game in motion. Gags, several involving pain, pile up at a rapid pace with many genuine laughs along the way. But the road is bumpy at times with some hit or miss comedy - depending on one's tastes. Directors John Francis Daley and Jonathan Goldstein have turned Mark Perez's screenplay into a frenetic board game. A good cast draws the audience into the action. Jason Bateman, Rachel McAdams and Kyle Chandler put their impressive comedic talents on display. A couple of supporting players nearly steal their thunder. Jesse Plemons is hilarious as neighbor Gary, a cop who has become unhinged after his divorce and desperately seeks to join in the game. Equally funny is Billy Magnussen as Ryan, a not-too-bright friend who brings a different ditzy girlfriend each week. Other cast members include Sharon Horgan as Sarah, a smart woman who Ryan brings to help him win, and Lamorne Morris as Kevin, who is happily married to Michelle (Kylie Bunbury) but is obsessed with finding out which celebrity she had a fling with before they wed. This obsession becomes a running gag throughout the film. Familiar faces in small roles include Jeffrey Wright, Danny Huston and Michael C. Hall. Behind the camera, Barry Peterson gets creative with his cinematography. His clever and subtle zoom-in transitions to apparent board pieces turn into real-life scenes. There are many twists, turns and surprises that won't be revealed here. The movie has its faults, like at least one unnecessary subplot, but it's the freshest comedy in quite some time. While it may not have a monopoly on this genre, the winning "Game Night" is anything but clueless. (4/5 CAMS)