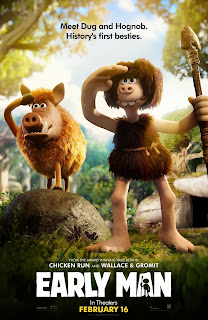 Caveman Dug (the voice of Eddie Redmayne) and his tribe lead a simple life that includes hunting rabbits, but the young hunter would prefer larger prey. Their existence is threatened by the arrival of Lord Nooth (voiced by Tom Hiddleston) and his Bronze Age City army. The Lord, Queen Oofeefa (Miriam Margolyes) and their city worship football (soccer). A game between the cavemen and Nooth's professional team will decide
if Dug's clan goes free or must work in the mines to extract the bronze ore.

Director Nick Park and those creative folks at Aardman Animations have carved out another toothy, gag-filled claymation treat. While not quite as inventive or funny as "Chicken Run" or the Wallace and Gromit shorts, this Bronze Age family comedy has enough humor and heart to engage both children and adults. Much of the humor is decidedly British, but there's more than enough to keep American audiences entertained. A lot is going on in this cartoon epic - too much to catch in one sitting. Among the background gags is a sign above a storefront selling Jurassic pork. Two battling dinosaurs in the film's open are listed in the end credits as Ray and Harry - a tip of the hat to stop-motion master Ray Harryhausen. The stop-motion here gets CG assistance, but it happily looks like a throwback to the studio's crude earlier works. The voice cast is splendid. Joining Eddie Redmayne, Tom Hiddleston and Miriam Margolyes are Timothy Spall as the aged caveman chief Bobnar and Maisie Williams as Goona, a Bronze Age City vendor who is skilled at football but can't play because she's a girl (guess where this plot thread goes). Director Nick Park voices Hognob, Dug's pet/sidekick wild boar. The screenplay by Mark Burton and James Higginson, from a story by Burton and Park, borrows from many comedies to deliver the goods. The big game is reminiscent of the match in "Bedknobs and Broomsticks" and many Flintstones-style jokes can be seen. Yet the final product is appealing with a sincere message about teamwork. "Early Man" rocks! (4/5 CAMS)