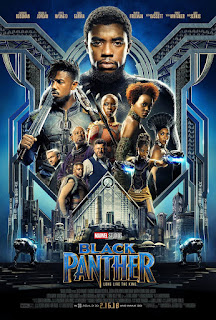 Battling villains as Black Panther, T'Challa (Chadwick Boseman) must return to his homeland of Wakanda after the death of his father King T'Chaka (John Kani). As the new king, T'Challa becomes protector of his people while keeping a secret from the outside world: the supposed third world nation is technically-advanced thanks to the alien metal vibranium. Getting in the way are
vicious arms dealer Ulysses Klaue (Andy Serkis) and mercenary Erik Killmonger (Michael B. Jordan), who may be the biggest threat to the throne.

Marvel once again freshens up this genre with an absorbing superhero adventure. Director/co-writer Ryan Coogler, who revived the "Rocky" franchise with "Creed", works movie magic with a cinematic blend of James Bond and super sci-fi. This isn't really an origins tale since T'Challa is already Black Panther at the film's start, but his beginnings are touched upon. A fast-paced spy caper is enhanced with location scenery ranging from Georgia to South Korea. The charismatic Chadwick Boseman makes a formidable hero in the style of 007. Letitia Wright adds the technical wizardry as Shuri, T'Challa's sister who provides gadgets and innovations that Bond's Q would be envious of. The A-list supporting cast includes Lupita Nyong'o as Wakanda spy and the new king's ex Nakia, Angela Bassett as Queen Mother Ramonda, Forest Whitaker as elder statesman Zuri, Sterling K. Brown as Prince N'Jobu, Danai Gurira as Okoye, the leader of the kingdom's fearless all-female guards, and Martin Freeman as CIA agent Everett K. Ross. Also of note are Winston Duke as the ruthless warrior M'Baku, a rival who leads a mountain tribe, and Daniel Kaluuya as W'Kabi, T'Challa's best friend and head of security for the Border Tribe. The villains add substance to the story. Andy Serkis is both vile and funny as the murderous Klaue, but an intense Michael B. Jordan takes center stage as the driven mercenary Killmonger, who has violent plans for the world. His character has a motive that the audience will sympathize with. Sure there are plot holes and a few implausible revelations, but that's part of the charm in this comic book world. This film is also not afraid to cover serious subjects that mirror today's society. Does Stan Lee make an appearance? Sure. Are there scenes during and after the end credits? Sure. The wildly enjoyable "Black Panther" claws its way to the top of the Marvel Universe. (4/5 CAMS)