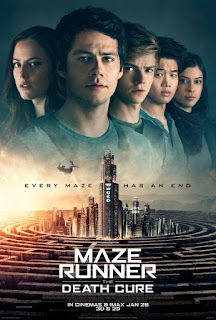 Thomas (Dylan O'Brien) and a small group of surviving Gladers, who are immune to a deadly virus, seek to break into a fortified city run by the WCKD (World in Catastrophe: Killzone Experiment Department) organization. The mission: rescue the immune kids, including good friend Minho (Ki Hong Lee), who are part of an experiment to find a cure for the lethal disease. Once inside the maze-like city, this band of warriors must face company enforcer Janson (Aidan Gillen) and his army of killers. Also in their way are WCKD's leader Ava Paige (Patricia Clarkson) and Thomas' former love turned turncoat Teresa (Kaya Scodelario), who will do anything to put an end to the virus.

Impressive action sequences can't
save this series' final chapter that has a very familiar plot and is void of heart and soul. Wes Ball, who directed the other two entries in the series, is at the helm once again. This movie is a slight improvement over the anemic "Maze Runner: The Scorch Trials", but not nearly as intriguing as the original. Compelling the first time around, the "racing through dangerous mazes" concept has worn out its welcome. T.S. Nowlin's screenplay, based on James Dashner's novel of the same name, seems content to mindlessly throw the heroes into as many dangerous situations as possible before bringing the series to a merciful end. The cast can't be faulted with this production's problems. Dylan O'Brien makes a stalwart teen hero (he suffered serious injuries on the set in 2016 that delayed completion) and Aidan Gillen is a convincingly vile villain. Thomas Brodie-Sangster and Dexter Darden return as Thomas' buddies Newt and Frypan. Giancarlo Esposito and Rosa Salazar are also back as Jorge and Brenda, long-time friends caught up in the struggle. Salazar takes center stage as the fearless female fighter. Patricia Clarkson adds revealing depth to her supposedly evil character Ava, but Walton Goggins  is almost comic relief as infected rebel leader Lawrence. There's at least one surprise in returning cast members. To its credit, the film cuts right to the chase with a fast and furious rescue attempt on a moving train and ends with a massive city battle. Everything else in this overlong adventure takes it down a notch and only die-hard fans may be pleased. "Maze Runner: The Death Cure" fails to amaze. (2/5 CAMS)