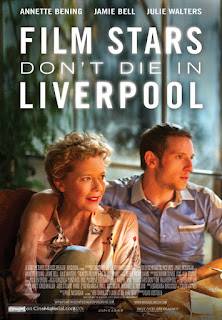 The final years of legendary film noir actress Gloria Grahame (Annette Bening) are explored in this true story. Escaping scandal that followed her life in America, Grahame moved to England where she started performing on stage. It was here that she met young actor Peter Turner (Jamie Bell). A romance led to a friendship that lasted until her death from cancer in 1981.

Annette Bening lights up the screen in this stunning portrait of a fading star. Based on Peter Turner's memoir of the same name, this engrossing film could easily have turned into a run-of-the- mill May-December romance if not for
the magnificent performances of both Annette Bening and "Billy Elliot" star Jamie Bell. Their fully fleshed-out portrayals transcend the story unfolding on screen. Director Paul McGuigan ("Lucky Number Slevin") and screenwriter Matt Greenhalgh, who scripted the fabulous John Lennon biopic "Nowhere Boy", masterfully display the latter years between 1979 and 1981 of actress Gloria Grahame, whose career featured many memorable roles as a femme fatale. "It's a Wonderful Life", "The Greatest Show on Earth" and "The Big Heat" are among her popular films. She won an Oscar for Best Supporting Actress in 1953 for "The Bad and the Beautiful". Flashbacks with clever transitions reveal the complicated relationship from their first meeting through her fatal illness. One involves a visit by the pair to see Grahame's mother (a terrific cameo by Vanessa Redgrave) and sister (Frances Barber) in Malibu where family secrets surface. Julie Walters and Kenneth Cranham are outstanding as Bella and Joe Turner, whose house is where Gloria goes to recuperate. A melancholic music score by J. Ralph is accompanied by Elvis Costello's original song "You Shouldn't Look At Me That Way". This movie whets the appetite for more about the early life of the actress and is a must for film buffs and fans of Bening and Bell. The enthralling "Film Stars Don't Die in Liverpool" keeps the memory of Gloria Grahame alive. (4 CAMS)