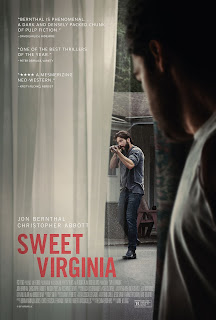 A triple murder in a small Alaskan town creates an atmosphere of fear. Elwood (Christopher Abbott), a stranger in town, checks into the motel run by former rodeo champ Sam (Jon Bernthal). Discovering they both have ties to Virginia, an uneasy friendship is formed. But the aftermath of the violent deaths leads to more trouble.

This tense thriller is a gripping character study with bursts of violence. The killer and motive are revealed early, but the impact isn't diminished. The Black List screenplay by brothers Benjamin and Paul China is set in Virginia, which makes the title more significant. Director Jamie M. Dagg moved the location to a small Alaskan town, giving the film a
darker atmospheric edge. The two lead protagonists have a past connection to Virginia, which keeps the title relevant. Powerful performances by Jon Bernthal ("Baby Driver") and Christopher Abbott ("It Comes at Night") amp up the tension as their shaky friendship begins to unravel. Not to be overlooked are Rosemarie DeWitt and Imogen Poots as two of the town's residents who have been widowed by the killings. DeWitt's character Bernadette has a romantic connection to Bernthal's Sam and Poots' Lila has a sinister secret. Even with much less screen time, both actresses are equally magnetic. Cinematographer Jessica Lee Gagné captures the film noir look of this modern day western, making good use of the Alaskan nights. The score by composers Brooke and Will Blair adds to the apprehension of the deliberately slow plot. The only downside is the numerous drives around the town. They tend to interrupt the story, which probably isn't the director's intention. Without revealing any of the film's crucial elements, this enthralling slice of cinema is worth seeing. "Sweet Virginia" is a killer drama. (3 CAMS)