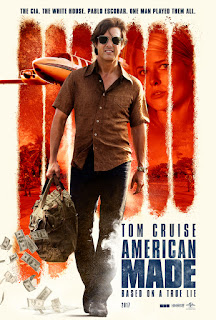 Commercial airline pilot Barry Seal (Tom Cruise), a hustler and daredevil who's been sneaking Cuban cigars into the country, is recruited by agent Monty 'Schafer' (Domhnall Gleeson) to fly covert missions to South America in a small plane for the CIA. Leaving his TWA job behind without
informing his wife Lucy (Sarah Wright), Seal secretly begins his flights for the government organization. Through the 1980s, he takes surveillance photos, delivers guns for rebel forces and supplements his income by smuggling drugs for the Medellín Cartel. But a life of lies and shady deals has a way of catching up with him.

Tom cruises through this high-flying biography in top form. With director Doug Liman ("The Bourne Identity") as his pilot, the charismatic actor gets to show off acting chops that expand well beyond the macho requirements of the "Mission: Impossible" and "Jack Reacher" films. He fully fleshes out a character that's difficult not to root for - even with his darker side. The real Barry Seal, portrayed more dramatically by Dennis Hopper in the 1991 TV movie "Doublecrossed", was most likely a less lovable person. Gary Spinelli's screenplay, loosely based on facts, covers familiar territory with a rather lighthearted approach to this serious subject. The storytelling is straightforward with Cruise's voice-over narrative, using bad vhs tapes of his face as he reveals the facts of his dangerous career. The supporting cast is good, especially Domhnall Gleeson ("The Revenant") as a controlling CIA agent and Sarah Wright ("21 & Over") as the out-of-the-loop wife who reluctantly stands by her husband. But all of the secondary roles take a back seat to the energetic Cruise. The film slows down when he's not on screen. The star gets a moderate share of action and plenty of flying time to display his many talents. Actual newsreel footage of the times, with political figures like Ronald Reagan, is threaded throughout the movie. There's much to love about this frenetic depiction of a screwed-up life. "American Made" is a quality product. (4 CAMS)