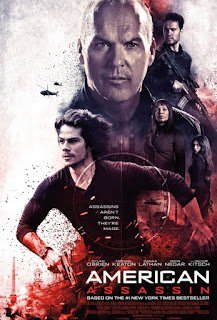 After his girlfriend dies in a terrorist attack, Mitch Rapp (Dylan O'Brien) is bent on wiping out his enemies all by himself. Reluctant at first, he is recruited by CIA Deputy Director Irene Kennedy (Sanaa Lathan) to join a black ops team headed by veteran Stan Hurley (Michael Keaton). When attacks on military and civilian targets result in stolen bomb-making materials, the newly-trained team joins Turkish agent Annika (Shiva Negar) on a mission to
stop rogue operative Ghost (Taylor Kitsch) from starting a war in the Middle East. Many obstacles stand in their way.

Good performances and bloody action give this popcorn thriller a shot in the arm. There's not a lot to think about in this predictable story. It took Michael Finch, Marshall Herskovitz, Stephen Schiff and Edward Zwick to write  the screenplay based on Vince Flynn's novel of the same name - one in a series of books featuring Mitch Rapp. Do too many cooks spoil the broth here? Not quite, but close. There is some fun to be had in this mostly mindless adventure. Director Michael Cuesta ("Kill the Messenger") maintains a fast pace, covering up plot holes that beg for answers along the way. The lead cast raises the quality of this film. The boyish-looking Dylan O'Brien is ruggedly charming as the revenge-seeking Rapp. Michael Keaton goes over the top with the best lines as the tough-as-nails mentor. As the villain, Taylor Kitsch plays nasty - but his character is motivated for good reason. For fans of television's "Agatha Christie's Poirot" detective series, David Suchet makes a welcomed appearance as CIA Director Stansfield. Spectacular scenery from London to Rome by cinematographer Enrique Chediak and Steven Price's stirring music score lend credibility to this standard spy tale. "American Assassin" is an enjoyable time killer. (3 CAMS)