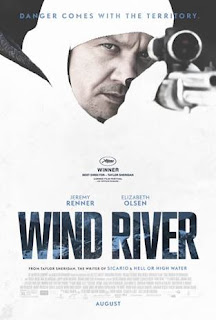 When local game tracker Cory Lambert (Jeremy Renner) discovers the body of a young woman in the icy wilderness on the remote Native American Reservation of Wind River, rookie FBI agent Jane Banner (Elizabeth Olsen) is sent in to investigate. Not used to the rough conditions of Wyoming's winter, Jane relies on Lambert's help in solving the mysterious death.

An interesting story and well-developed characters lift this chiller to above-average. Director/writer Taylor Sheridan, who wrote "Hell or High Water" and "Sicario", has created another fascinating modern "western". What makes this movie standout is not so much the mystery, but the performances. Taking center stage is Jeremy Renner as the rugged tracker who is haunted by
the death of his daughter. Divorced with a young son, he becomes obsessed with the hunt. Elizabeth Olsen is anything but helpless as the rookie in over her head on this case. Among the fine supporting cast are Graham Greene as the beleaguered chief of the short-handed reservation police force and Gil Birmingham as the grieving father of the dead girl. Director Sheridan maintains a deliberate slow pace, revealing clues piece by piece while injecting jarring bursts of violence to heighten the suspense. Near the end, a cleverly-inserted flashback with the victim (Kelsey Asbille) and her boyfriend (Jon Bernthal) offers an explanation. This may seem to be an afterthought, but pay attention to the context. A melancholy score by Nick Cave and Warren Ellis weaves throughout the story. The desolate landscape is spectacularly captured by cinematographer Ben Richardson - reminiscent of the Robert Mitchum classic "Track of the Cat" and even the more recent "The Revenant". This magnificent cinematic thriller has much to say about isolation, loss and healing. Rich in outdoor adventure, "Wind River" overflows with tense drama. (4 CAMS)