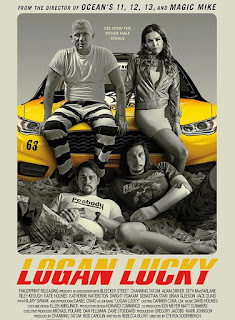 Down on his luck and out of work, Jimmy Logan (Channing Tatum) and his equally unlucky one-armed brother Clyde (Adam Driver) attempt to put an end to the family curse by executing an intricate robbery during a race at the Charlotte Motor Speedway. They enlist the aid of their sister Mellie (Riley Keough) and explosives expert Joe Bang (Daniel Craig). One Problem: Bang is in prison and needs to be busted out. A complication for Jimmy is his need to be a part of his young daughter Sadie's (Farrah Mackenzie) life. His ex-wife Bobbie Jo (Katie Holmes) and her husband Moody (David Denman) are about to move away and take Sadie with them. Success at the raceway could turn things around.

Steven Soderbergh returns to the director's chair with this entertaining and often-hilarious heist caper. This time around, he takes the casino-setting plot of his "Ocean's Eleven" series and
moves it to the NASCAR speedway. Once again, the story is complicated and filled with characters and details to follow. But there's plenty of fun along the way. The cast handles the down-home deadpan humor with ease. Tatum and Driver are outstanding as the luckless brothers, but the biggest surprise is a comedic turn by Daniel Craig as the light-haired macho Bang - a candidate for Best Supporting Actor. Also providing laughs are Jack Quaid and Brian Gleeson as Fish and Sam Bang, Joe's rather dimwitted siblings. Farrah Mackenzie is adorable as the young Sadie,who is determined to win a beauty pageant and hang out with her dad. Seth MacFarlane goes incognito as the insufferable British race driver Max Chilblain. Taking place at a speedway, there are several real-life drivers making cameo appearances. Among them are Jeff Gordon, Darrell Waltrip and Kyle Busch. Showing up late in the movie is Hilary Swank as an FBI agent. Others in brief roles and cameos are Katherine Waterston, Dwight Yoakam, Sebastian Stan, LeAnn Rimes and more. Star-studded indeed. First-time screenwriter Rebecca Blunt, a suspected pseudonym, has scripted this nearly two hour Southern romp that goes by pretty fast - sprinkled with twists, turns and a minimum of missteps. Soderbergh rolls the dice with "Logan Lucky" and comes up with a winner. (4 CAMS)