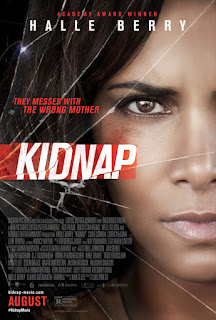 When her son Frankie (Sage Correa) is abducted from the park they are visiting, a frantic Karla Dyson (Halle Berry) will stop at nothing to save him. Without her cell phone, she takes off after the the kidnappers in a high-speed chase. Karla will rescue her child at all costs.

Halle Berry's believably fierce performance and some outrageous chase sequences keep this mindless and mildly entertaining "B" movie from totally veering off the road. Throwing logic out the window, it's surprising that the tires on her minivan aren't
destroyed after driving over all of the plot holes in this flick. There are so many illogical moments that it's better not to think at all and just sit back and enjoy the ride. A fast ride it is thanks to director Luis Prieto and writer Knate Lee. Having Oscar-winning actress Halle Berry at the wheel doesn't hurt between the high speed pursuit, crashes and carnage. But there's very little suspense, even when the kidnappers are confronted. Fortunately, no character development is needed in a supporting cast that gets minimum screen time. Chris McGinn portrays the female abductor and Lew Temple the male. Shot in 2014, this thriller's release was delayed because of Relativity's financial problems. The studio finally lost the rights and a new home was recently found in Aviron Pictures. While there are many wrong turns in this film, it's a movie with a payoff that includes messages about missing children and determination - all in under 90 minutes. "Kidnap" captures a parent's persistence in a frenzied fashion. (3 CAMS)