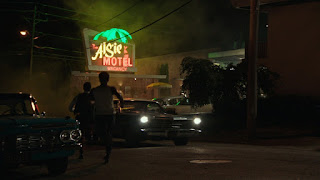 During the 1967 race riots in Detroit, a police raid at the Algiers Motel results in the deaths of three African American men. Night watchman Melvin Dismukes (John Boyega) gets caught up in the escalating violence during a brutal interrogation led by a racist police officer (Will Poulter) that ends in tragedy.

A striking dramatization blended with graphic newsreel footage makes this
an absorbing and, at times, harrowing experience. Director Kathryn Bigelow and writer Mark Boal, the team responsible for "The Hurt Locker" and "Zero Dark Thirty", deliver another award-worthy contender. Like their previous efforts, this is a war movie. The difference is that this film is deeply rooted in the United States. Many scenes, especially during the brutality at the motel, are difficult to watch but impossible to turn away from. While the interrogation and the resulting court trial go on too long, the length is necessary for full impact. Many facts are known from eyewitness accounts, but fiction fills in the blanks for a lasting impression. An outstanding ensemble cast inhabits this powerful film. John Boyega ("Star Wars: The Force Awakens") is intense as real-life night watchman Melvin Dismukes. But if anyone steals the spotlight it's Will Poulter ("The Revenant") as a stone-cold, emotionless racist cop. His performance could land him a Best Supporting Actor nomination. Also notable are Algee Smith ("Earth to Echo") as an aspiring singer in the R&B group "The Dramatics", whose life begins to crumble during the riots, and Anthony Mackie (Falcon in the Marvel Cinematic Universe) as a burnt-out war vet. Kaitlyn Dever (Eve Baxter in TV's"Last Man Standing") and Hannah Murray (Gilly in "Game of Thrones") portray the two young white girls looking to party at the Algiers who end up with a frightening experience. The music and James Newton Howard's score are pure 60s with a Motown beat. The Roots and singer Bilal provide the soulful song "It Ain't Fair". Much to the credit of Bigelow and Boal, this engrossing depiction is truly relevant today and should never be forgotten. "Detroit" deserves to be a driving force during awards season. (4 CAMS)