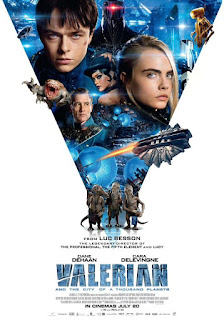 Alpha, a futuristic city made up of thousands of different species from across the universe, is threatened by an unknown force. Commander Filitt (Clive Owen) sends government operatives Major Valerian (Dane DeHaan) and Sergeant Laureline (Cara Delevingne) to the endangered city to identify and stop the menacing intruders. Complicating matters is the fact that womanizer Valerian is starting to fall for his beautiful partner.

A colorful galaxy of fun for the eyes and ears that doesn't have much for the brain. But it's still worth a matinee for sci-fi lovers. Based on the French comics series "Valérian and Laureline", director/co-writer Luc Besson ("The Fifth Element") throws everything at the screen and some of it sticks. Out-of-this-world sets, characters, effects and 3D cover nicely for a
predictable plot and some questionable performances. The weakest link in the chain is Dane DeHaan as kind of a teenage-looking James Bond - make that Matt Helm, without the Dean Martin vocals. He's not very convincing in this obvious spy spoof that thankfully doesn't take itself seriously. DeHaan also has no chemistry with his co-star. On the other hand, Cara Delevingne is convincing as a gorgeous and aggressive crime-fighter. She could carry a movie in this genre on her own.Some recognizable supporting players are along for the ride. Clive Owen makes a commanding presence as the operatives' leader. Rihanna is charismatic as shapeshifting entertainer Bubble and Ethan Hawke is rather slimy as Jolly the Pimp. Musician Herbie Hancock has a small role as the Defence Minister. John Goodman provides the voice of the Jabba-ish criminal Igon Siruss - one of many send-ups to films like "Star Wars" and "Avatar". A rousing score by composer Alexandre Desplat weaves in and out of the story. With the spaced-out "Valerian and the City of a Thousand Planets", Luc Besson remains in his element. (3 CAMS)