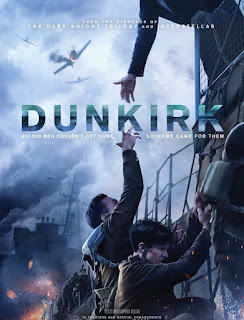 When the Germans trapped hundreds of thousands of British and Allied forces on the beaches of Dunkirk in 1940, a desperate rescue attempt resulted in saving nearly 400,000 lives. The evacuation is presented in three interconnected parts. By land: British soldier Tommy (Fionn Whitehead) takes extreme measures with Gibson (Aneurin Barnard), Alex (Harry Styles) and others to return home safely. By sea: civilian Mr. Dawson (Mark Rylance), one of many taking their boats to save the besieged troops, heads across the English Channel with his son Peter (Tom Glynn-Carney) and Peter's friend George (Barry Keoghan). On their journey they pick up a scarred survivor (Cillian Murphy) who violently refuses to return to Dunkirk. By air: a handful of pilots lend support by trying to take down attacking Nazi planes. With his fuel running low, Farrier (Tom Hardy) keeps up the battle in the sky as long as possible.

Director/writer Christopher Nolan masterfully revives the
classic war film with an edge-of-your-seat, emotionally-charged thriller. Although focusing on fictitious participants, this harrowing depiction is frighteningly realistic and succeeds with minimum combat action. There is very little character development, but little is needed here. It is impossible to single out one performance, making this epic the true definition of ensemble acting. The actors are all impressive, from big screen newcomers Fionn Whitehead and singer Harry Styles to veterans Mark Rylance and Kenneth Branagh, as the stalwart Commander Bolton. Once again, Tom Hardy convincingly acts through a mask - the bane of his cinematic existence. If anything stands out in this film, it's the music. Hans Zimmer's pulse-pounding score is a driving force that amps up the tension second by second. A rarity in cinema, this soundtrack should easily be an awards contender at year's end - along with Best Picture, Director and Hoyte Van Hoytema's stunning cinematography. A champion of the film format, Nolan shot this movie in a combination of Super Panavision 65mm and 15/70mm IMAX. I do recommend you see this involving experience on the biggest screen possible. Christopher Nolan's "Dunkirk" breathtakingly rescues an aging genre. (4 CAMS)