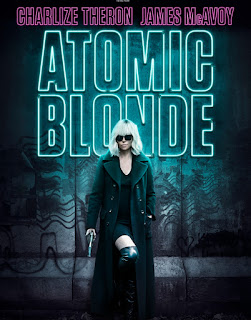 Near the end of the Cold War, deadly MI6 operative Lorraine Broughton (Charlize Theron) is sent to a divided Berlin to retrieve a list of spies that all sides are after and to unveil a double agent. She also wants to find out who killed another British spy who had ties to her. Partnering with station chief David Percival (James McAvoy), Lorraine uses her unique set of skills to accomplish the mission.

Wild action sequences mixed with high fashion keep this standard, but complicated spy plot from falling apart. The fun is in watching
the elegantly-dressed Charlize Theron kicking butt to some kicking tunes that range from George Michael's "Father Figure" to A Flock Of Seagulls' "I Ran (So Far Away)". The designer outfits she fights in are outrageous - right down to an impressive pair of red Dior heels. At one point when Berlin police enter an apartment she has broken into, Lorraine exclaims, "If I had known, I would have worn a different outfit". Having moments like this, the movie doesn't take itself too seriously. David Leitch, a stuntman who was the co-director of "John Wick", helms this fast-paced and comical thriller - keeping the focus on his magnetic star. A high-powered supporting cast adds a touch of class. James McAvoy is a commanding presence as the unhinged and aggressive bureau chief. John Goodman as a CIA agent working with MI6 and Toby Jones as Broughton's superior beef up their brief roles. Sofia Boutella portrays a seductive French spy who connects with Lorraine and Eddie Marsan is a knowledgeable ally desperately seeking to come in from the cold. This is not for the kids. It is a graphically bloody and stylized concoction of sex and violence. But it bonds well with other spy flicks. Some witty dialog and scenarios, courtesy of Kurt Johnstad's screenplay, hearken back to other films in this genre. With Charlize Theron in fine form, "Atomic Blonde" is a blast. (3/5 CAMS)