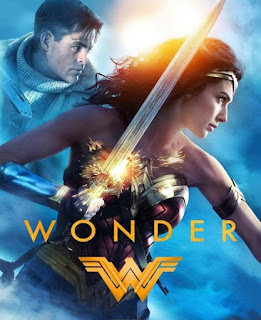 Diana (Gal Gadot), daughter of Queen Hippolyta (Connie Nielsen), has grown up on the island of Themyscira, where Amazons are trained to be warriors. Sheltered from training by her mother, she is secretly taught the art of combat by her aunt Antiope (Robin Wright). When hunted pilot Steve Trevor (Chris Pine) crashes near the island, Diana rescues him and learns about the raging war in the outside world. The warrior princess is determined to leave her island home with Trevor and seek out the Greek God of War Ares to kill him and put an end to World War I.

"Wonder Woman" takes flight with bursts of action, strong lead performances and witty dialogue. A slow deliberate opening sheds light on the upbringing of this superhero. The peaceful island existence is soon shattered by
a battle with German forces looking for the downed pilot. Once Diana leaves home, the pace quickly picks up. Credit director Patty Jenkins, who helmed the indy success "Monster" starring Charlize Theron, and her star Gal Gadot with waking up the tired and formulaic DC Comics movie series. Granted, there are a few sluggish moments and an over-the-top CGI laden ending battle that seems familiar, but the energetic cast and Allan Heinberg's story/screenplay (with help from Zack Snyder and Jason Fuchs) add depth to William Moulton Marston's female superhero creation. This movie is a far cry from the Lynda Carter/ Lyle Waggoner TV series that brought Diana Prince to the small screen. Gadot is more expressive and fearless in the role while Chris Pine nearly steals the show as the adventurous Trevor. Pine displays amazing  actions and reactions to the superhero's powers and the chemistry is good between the two stars - even when romance is added into the mix. Danny Huston, as General Ludendorff, and Elena Anaya, as scarred chemist Dr. Maru, provide the necessary evil. Comic relief comes in the form of Lucy Davis as Steve's loyal secretary and Ewen Bremner as Trevor's hard-drinking ally. David Thewlis is a commanding presence as Sir Patrick, a member of the British War Cabinet who finances the secret mission to stop the German plot to gain control. Also of note is the adorable Lilly Aspell as the young Diana. But this film rests on the capable shoulders of Gadot, a former Israel Defense Forces combat trainer. She makes the action, romance and comedy believable. Gal power whips up a roaring adventure. (4 CAMS)