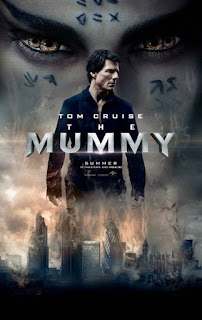 American soldiers Nick Morton (Tom Cruise) and his pal Chris Vail (Jake Johnson), who steal rare artifacts while on missions in the Middle East, accidentally unearth an ancient tomb-like prison after a battle with insurgents. Unknowingly releasing evil Egyptian Princess Ahmanet (Sofia Boutella), Nick is now cursed to help her fulfill her terrifying destiny. With unexpected help from
archaeologist Jenny Halsey (Annabelle Wallis) and a secret organization headed by Dr. Henry Jekyll (Russell Crowe), Nick sets out to save himself - and the world.

Frenetic action and some ghoulish effects make this anemic thriller a mindless piece of popcorn fare. While short on shudders and chills, there is a little entertainment in watching Tom Cruise play against his normal stalwart hero type. He's a thief with character flaws who takes several beatings from the mummy princess and her army of zombies. The undead horde puts this film more in "The Walking Dead " territory, bringing a different level of horror to this series. But it lacks the fun of those Brendan Fraser Mummy movies and takes itself much more seriously. A bit of humor is added in the form of Jake Johnson as Chris, the put-upon buddy of Nick. Russell Crowe chews up the scenery as Dr. Jekyll and really lets loose when he turns into Hyde. Having a female in the title role puts a new spin on the scary legend. Sofia Boutella looks good - even covered with hieroglyphics, wrapped in gauze and decayed. Director Alex Kurtzman ("People Like Us") maintains a furious pace throughout this mostly predictable adventure. The ending has a slight twist that hints at a sequel. This is Universal's first entry in their Dark Universe franchise of monster revivals. As such, this film should have been more epic, exciting and memorable. Hopefully, "The Mummy" won't entomb the Dark Universe. (2 CAMS)