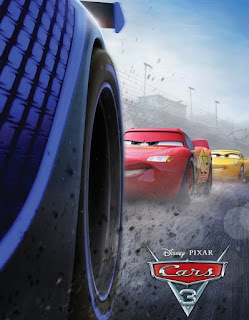 After years of being top dog, the legendary Lightning McQueen (the voice of Owen Wilson) is starting to show his age. With competition from newcomers like the aggressive Jackson Storm (Armie Hammer), McQueen must get back up to speed. Encouraged by his old friends in Radiator Springs, Lightning finds help in the form of his sponsor's new owner Sterling (Nathan Fillion) - a wealthy business car who has plans to turn him into a racing brand. Also on board is trainer Cruz Ramirez (Cristela Alonzo), who has dreams of her own. The race is on.

Breathtaking race sequences, dazzling animation and familiar characters save "Cars 3" from
spinning out of control. After the spy caper in the first sequel, it's nice to see the vehicles return to their roots. Only a slow start and an occasional bogging down in details may, at times, lose the attention of kids and a few adults. But first-time director/co-writer Brian Fee fills the screen with enough heart, soul, emotion, life lessons and action to keep the audience engaged. It's the little touches that work for this critic, like a fitting tribute to Lightning's mentor and inspiration Doc Hudson - the Hudson Hornet voiced by the late Paul Newman. There's also a nod to "Toy Story" (hint: check out McQueen's tires). The splendid voice cast is the driving force behind this animated feature. Besides the above mentioned, Larry the Cable Guy as tow truck Mater and Bonnie Hunt as Lightning's girlfriend Sally Carrera lead the pack. Being a Pixar film, the dependable John Ratzenberger is on board as transport truck Mack. Chris Cooper provides vocals for Smokey, Doc's former crew chief. One refreshing twist is that this movie doesn't quite have the expected pat ending. Speaking of the ending, be sure to stick around for a humorous scene after the credits. Also, arrive early for the delightfully funny and creative new cartoon short "Lou". It's about a hidden monster with an agenda in a lost-and-found box at a playground. The freewheeling "Cars 3" keeps the series on track. (3 CAMS)