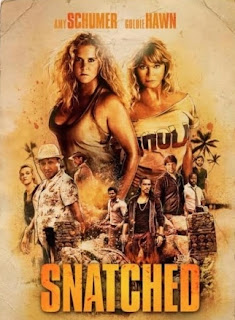 After her boyfriend breaks up with her just before their non-refundable exotic vacation, Emily Middleton (Amy Schumer) cons her mother Linda (Goldie Hawn) into going along for some fun and relaxation. But their good times in Ecuador end when the pair are kidnapped and held for ransom in Colombia. Frantic attempts to escape ensue.

Boisterous humor and good chemistry between the two stars give this predictable comedy an entertaining boost. There's nothing here you haven't seen before, but the teaming of Amy Schumer and Goldie Hawn is
inspired casting. Make no mistake, foul language, gross-out jokes and sight gags  are plentiful - placing this romp squarely in adult territory. Director Jonathan Levine ("The Night Before") and writer Katie Dippold ("The Heat") fill this fast-paced movie with outrageous and hilarious situations. Much of the hilarity comes from the supporting cast. Christopher Meloni steals the show in a small role as a supposedly seasoned adventurer who aids the duo in their escape. Wanda Sykes and Joan Cusack play Ruth and Barb, a couple who try to rescue the captured pair. Barb has military skills that come into play. Ike Barinholtz ("Neighbors") is Emily's nerdy brother Jeffrey, who has mommy issues and is desperate to save his family. While Schumer and Hawn provide many chuckles in their relationship, there are some touching bonding moments too. "Snatched" grabs the audience with laughs and holds them with a bit of heart and soul. (3 CAMS)