PIRATES OF THE CARIBBEAN: DEAD MEN TELL NO TALES 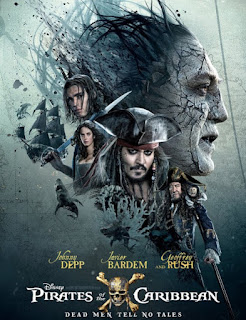 Looking to lift the curse of the Flying Dutchman from his father Will (Orlando Bloom), Henry Turner (Brenton Thwaites) seeks the powerful and legendary Trident of Poseidon to accomplish this task. The only person capable of finding the Trident is Captain Jack Sparrow (Johnny Depp), who needs it to save his own life. Ghostly anti-pirate Captain Salazar (Javier Bardem) and his crew, inadvertently released from their watery grave by Jack, are out for revenge against Sparrow - who sent them to their doom. Also in the search is feisty astronomer Carina Smyth (Kaya Scodelario), seeking answers to her origins. Hunted for various crimes,
Jack, Henry and Carina head out on their quest - staying one step ahead of Salazar, the British Navy and pirate captain Hector Barbossa (Geoffrey Rush).

Jack Sparrow is flying high in this adventure packed with swash and buckle. Just like the popular Disney Parks attraction on return visits, this movie is lacking the awe and excitement of the first time around. But, as with the ride, it keeps drawing you back in. Let's face it, the plots don't vary much in this series. Yet it's a winning formula. There's still fun to be had in this non-stop roller coaster. Directors Joachim Rønning and Espen Sandberg ("Bandidas") put the excellent cast, mainly Johnny Depp, through their paces with action from beginning to end.There are some details to pay attention to and a few loose ends are tied up, especially involving past lovers Will Turner and Elizabeth Swann (Keira Knightley), before the film's finish. The park ride gets upgrades to keep things interesting and so does this movie. The Stones' Keith Richards rolled around as Jack's father in Pirates 3 & 4, so it was only a matter of time before a Beatle would come on board. Paul McCartney, in heavy makeup, gets a cameo as Sparrow's uncle. Also new are Brenton Thwaites and Kaya Scodelario as Jack's attractive allies. A welcomed return is Kevin McNally as Gibbs, Sparrow's loyal friend and First Mate. Sets, costumes, a thunderous score by Geoff Zanelli and magnificent special effects fill the screen. The unforgettable effects include the ghastly Salazar, his crew and Jack's shrunken ship-in-a-bottle: The Black Pearl. For Ray Harryhausen buffs, catch a ghost ship's wooden masthead that comes alive to do battle - shades of "The Golden Voyage of Sinbad". Watch this well-told tale on the biggest screen possible in immersive 3D and stay through the credits for a final scene. "Pirates of the Caribbean: Dead Men Tell No Tales" is indeed see-worthy. (4 CAMS)