KING ARTHUR: LEGEND OF THE SWORD 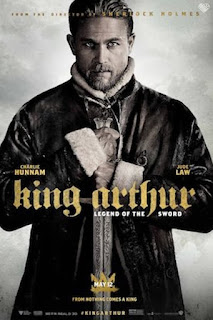 Raised in a brothel after his royal parents are murdered by his treacherous uncle Vortigern (Jude Law), Arthur (Charlie Hunnam) grows up streetwise and unaware of his roots. He is forced to face his legacy when he pulls the legendary sword from the stone. Seeking his rightful place on England's throne, Arthur joins the Resistance while learning to embrace the power of Excalibur.

Striking visuals and a dynamic lead performance can't save this muddled origins story of the
future ruler and his sword. Director Guy Ritchie, who brilliantly revived Sherlock Holmes on the big screen, fails to breathe life into the legend of King Arthur. Even if the tale wasn't well-known, the simplistic screenplay by Joby Harold, Lionel Wigram and Mr. Ritchie (from a story by David Dobkin and Joby Harold) is easy to deduce. Frenzied battle sequences, non-stop swordplay and massive special effects that include gigantic elephants and snakes fill up most of the over two hours of running time. The director also throws in some tongue-in-cheek humor, quick-cut pieces depicting past events and flash-forward looks at future happenings that seem more appropriate for one of his earlier film efforts like "Snatch". All of these film industry tricks, including a loud anachronistic music score by Daniel Pemberton, add up to a major distraction. This is too bad because the cast is good. Charlie Hunnam makes a stalwart hero and Jude Law is a vile villain. Also noteworthy are Eric Bana as Arthur's father King Uther and Astrid Bergès-Frisbey as The Mage, who aids him with magical powers. Djimon Hounsou and Aidan Gillen ("Game of Thrones") stand out as Arthur's friends Bedivere and skilled archer Goose Fat Bill. Soccer great David Beckham gets in a few kicks as a villainous henchman. For those who grew up with "The Sword in the Stone", "Camelot" and even "Excalibur", this movie with absolutely no romance will come as a shock - and this is the first installment in a reported series. Style over substance dethrones this cinematic heir to the royal legend. (2 CAMS)