GUARDIANS OF THE GALAXY VOL. 2 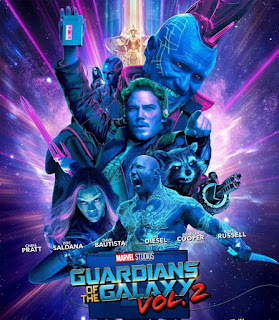 Peter Quill/Star-Lord (Chris Pratt), Gamora (Zoe Saldana), Drax (Dave Bautista), Rocket (the voice of Bradley Cooper) and Baby Groot (the voice of Vin Diesel) are busy battling a gigantic monster to save valuable batteries for Ayesha (Elizabeth Debicki), the leader of the Sovereign race. In return, Ayesha will release Gamora's estranged sister Nebula (Karen Gillan). But Rocket steals the batteries and the Guardians find themselves being pursued across the galaxy by the Sovereign and their hired hunter Yondu (Michael Rooker), who raised Peter from a young boy. While on the run, the Guardians encounter Ego (Kurt Russell), who claims to be Peter's real father. Life is about to get complicated and a new threat to the galaxy awaits.

The Guardians return in grand style with explosive
action, spectacular effects, another killer soundtrack and laced with the humor that made their first adventure work so well. What's missing is an inventive and totally original story. But it doesn't matter because this time around you get to spend more than 2 hours with this awesome group of characters. Director/co-writer James Gunn ("Slither") keeps things moving at a fast pace to cover up a sometimes convoluted plot. The cast is nothing short of perfection. It will be said that Vin Diesel's Baby Groot steals the show, but he gets some stiff competition from Bradley Cooper's Rocket and Dave Bautista, whose Drax enters into a humorous relationship with Mantis (Pom Klementieff) - a being with empathic powers who was raised by Ego. Sylvester Stallone is also on board as high-ranking Ravager Stakar Ogord. This stand-alone movie in the Marvel Universe has heart and soul with much to say about family - not just father/son or sisters, but sticking together as friends. Once again, fabulous tunes fill the theater. Cheap Trick, Glen Campbell, Looking Glass, Cat Stevens and many more rock the screen. Cameos, including Stan Lee, and references from the past are also plentiful. Also, stick around through the end credits for a few surprises. Big screen 3D is optional, but not needed to enjoy this sci-fi treat. I am Groot! "Guardians of the Galaxy Vol. 2" is a rousing and rollicking galactic trek. (4 CAMS)