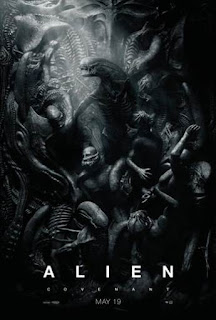 The spaceship Covenant, en route to a distant planet with a cargo of hibernating settlers, is forced to land on a nearby uncharted planet when an accident befalls the ship. The crew that includes Oram (Billy Crudup), Daniels (Katherine Waterston), Tennessee (Danny McBride), Lope (Demián Bichir), Karine (Carmen Ejogo), Ricks (Jussie Smollett), the android Walter (Michael Fassbender) and others are confronted with an unimaginable horror. They must fight for their lives in this alien world.

Thrills, chills and buckets of gore add up to
a bloody good show. Taking place after "Prometheus" and before "Alien", director Ridley Scott sends his sci-fi series in a direction that should please fans and newcomers alike. The downside is an extremely slow, but necessary, open that leads to a build up of tension before it evolves into a symphony of vomit-inducing violence. This is not for the squeamish. The cast is above average for a movie that amounts to a high quality 'guess-the-next-victim' matinee flick. Katherine Waterston is fully ripped, or is that Ripley'd, as the fearless heroine. Danny McBride shows some emotion, but few laughs, as the ship's pilot. It's not a spoiler to say that Michael Fassbender carries more than one role. Besides Walter, he also plays the Prometheus' android David, who now appears to be the only survivor on the forbidden planet. He is magnificent in his dual performances. Billy Crudup is also good as the second-in-command who reluctantly takes charge (look for James Franco briefly as the ship's captain). Atmospheric sets and some all-too-realistic special effects amp up the scare value. The late H.R. Giger's creature design remains nearly intact. While Jerry Goldsmith's "Alien" score is hard to beat, Jed Kurzel's music complements the frightening action. Certainly not the best in this series, Scott at least delivers a satisfying film that should keep the franchise alive. Questions are answered about the creatures' origins and a deliciously twisted ending foreshadows future adventures. "Alien: Covenant" is an out-of-this-world horror fest. (3 CAMS)